The seasons are so pronounced in a deciduous wood like Roland's Wood, and though it seems like summer is not going to end, if you take a walk through the woods and see the trees turning all shades of red and gold you know we are well into autumn... 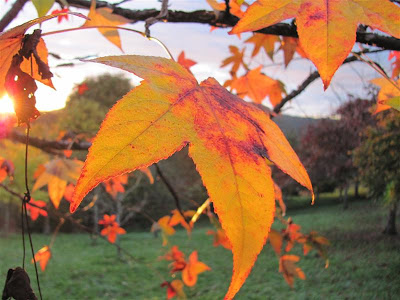 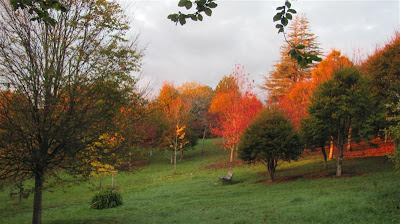 Photos by Keri Molloy.  Click on photos to enlarge.


I came across this passage in the book The Sin Eater by Gary Schmidt, about the sensory rediscovery  each autumn brings...

"You can’t tell someone what fall leaves look like in New Hampshire. In fact, you can’t even really remember what they look like from one year to the next. Every fall they throw a surprise party, and suddenly you remember what you’ve forgotten. And it’s not just the colours. It’s the cooler breezes that draw across the leaves, making them shiver. It’s the cold dew that beads on them and wets the arm of your jacket. It’s the dusty smell when they are dry in the afternoon. And it’s the thick smoke that coils up from them when they burn just before suppertime."


New paths have been created in Roland’s Wood, providing opportunities for people – and their dogs – to explore new routes, come across vistas not previously seen, meet some of the oldest trees in the Wood previously inaccessible, and, of course, for canine visitors, investigate a wealth of exciting new smells...

The new paths have been carefully planned to help alleviate the damage caused by sudden downpours of rain which have been causing erosion.  Using tracks to shape the landscape enables the water to be diverted and spread over a much wider area instead of gushing down in torrents into the gullies.

Ultimately, all the paths will be mulched as mulch, time and labour are available, and this will pack down and make good, soft, all-weather walking tracks.  The downward sloping sides have been mulched already to avoid erosion, and the new plantings of renga renga lilies and clivias are also part of this water management plan.

John says, “From the gate, head up to the first picnic table and from there down the hill – this track links around without going right down to the swamp area which can be slippery after rain, and also it “takes the grunt” out of walking up from the ponds to the gate – you might walk a little bit further but it is on a more level track !”

The tracks are designed to maximise people's enjoyment of the Woods, with not only the seasonal differences adding variety but also the different plantings so that each route has its own character.

Now perhaps we need an artist who will create a map of Roland’s Wood – any takers ? How about this map of the The Lost Gardens of Heligan as inspiration ? 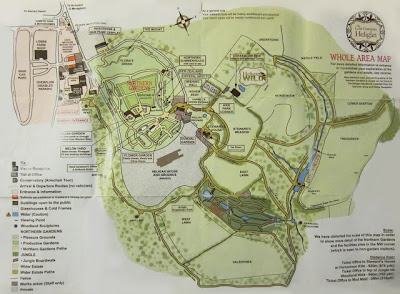 Back in late February (sorry, this post is rather delayed for one reason or another) Roland's Wood benefited hugely from the organisational skills of John Horrell and the generosity of a number of kind donors to provide and spread mulch for the plants in various parts of the Wood.  It was a godsend in the hot dry summer weather, especially for the young trees and understory plantings of clivia and renga renga lilies...

The mulch came from Mt Pokaka and Bay Lumber Waipapa as well as a number of other kind donors.  It was delivered for free by Dan Carter bulk carriers - big heaps of it were piled up in mounds up at the top back corner of the Woods. Mark Klinac donated the use of a digger and bobcat for a day to spread the mulch in strategic locations around the Wood, leaving it in smaller piles where it was then spread by the bucketload by volunteers. 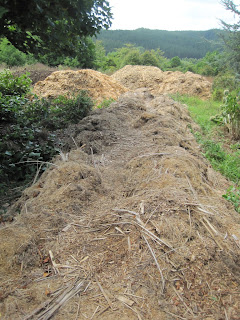 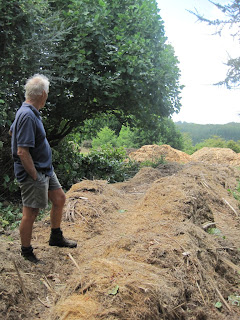 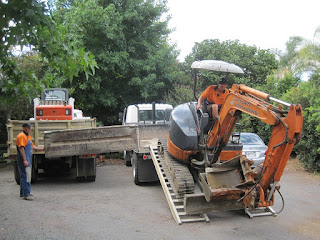 Here are the guys unloading the digger and the bobcat, and then a bit of discussion about what goes where, where to start... 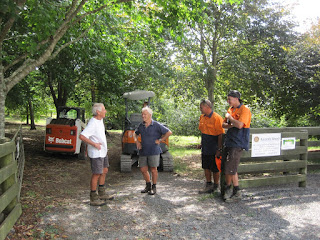 I nipped out to Roland's Wood from work mid morning to take these photos on the day it was all happening, and then went back that evening after supper with friends visiting from England - it was almost dark - we saw an owl swooping from tree to tree as we walked along which was wonderful - but it was easy to see even in the half light the difference that had been made already that day - new paths, mulch spread around, and the mountains of mulch much diminished.

Many thanks from John and the Roland's Wood team for all the community support - your contributions are greatly appreciated.
Posted by Jeannie at 9:11 PM