Roland’s Wood is being developed on rather a shoestring budget, with lots of volunteer labour and donations. There are some big items on the “wish list” which would really help with the management and development of the Woods, and so we are mentioning them here just in case there is someone reading this who would like to contribute towards achieving any of these goals…
If you would like to help with any aspect to whatever extent, then please contact John Horrell on 407 8239 to talk about it...
Posted by Jeannie at 5:49 PM

Rain couldn't dampen the spirits of the 60 or so cheerful people who came along to Roland's Wood on Tuesday, 3rd December 2013 to celebrate Roland's gift to the community with the unveiling of a plaque, as well as acknowledging all the hard work by John Horrell with the presentation of his 2012 FNDC Citizens Award.

The dogs ran around and sniffed all the wonderful earthy and interesting smells, and people stood under their umbrellas amidst the dripping beech trees.  The new FNDC Mayor, John Carter, spoke warmly about growing up in the same Maungaturoto farmland area as Roland's family, and about what Roland's gift meant for Northland.  He then praised John Horrell for all he had done to revive and reinvigorate the Woods, and presented him with the Certificate of appreciation for his "extraordinary services to the Far North District". 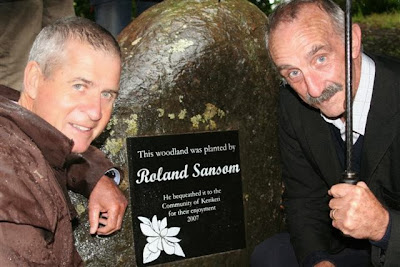 Martin MacPherson, Rotary Kerikeri Chair, and His Worship the Mayor, John Carter, with the plaque. 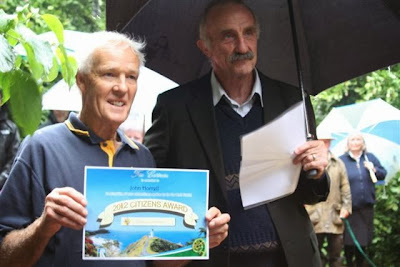 Hardworking and modest John Horrell, receiving his Certificate from the Mayor. 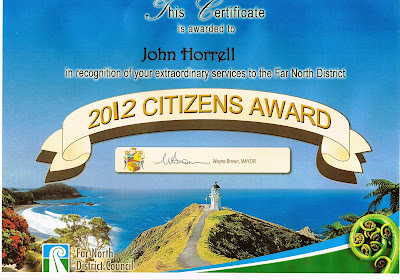 Some of Roland's family were there - his sister, Lavender, and his cousin Tony Edgar who had come up from Auckland, along with friends of Roland's and John's, along with people who regularly visit and enjoy the Woods who were not deterred at the prospect of getting a bit damp! 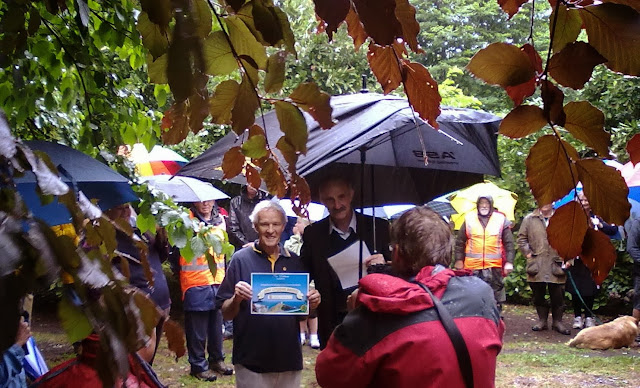 Noted New Zealand plantsman and gardener Gordon Collier, Member of the New Zealand Order of Merit for distinguished services to horticulture, was not able to be at the event in Roland's Wood, but sent this message which was read out :


I am sorry I can't be with you on this important occasion.  Roland was a special friend to me for many years. He loved the finer things in life and often spoke in wistful tones of the blue bell woods and trees of England - he was a delightful romantic. Were he here today he would be justly proud of his achievement and even more that the people of this area were enjoying his priceless Wood also.  Well done Roland - not many of us are able to leave a legacy for future generations as you have done.  And may I add a huge thank you on Roland's behalf to all those volunteers who have worked so hard to keep Roland's dream alive.